By understanding what the structures of the mouth look like normally on an X-ray film, Dr. EDward M. Amet can diagnose problems in the teeth and jaws during your appointment at Reconstructive and Implant Dental Center. Radiographs can:
• Show areas of decay that your prosthodontist may not be able to see with just a visual examination, such as tiny pits of decay that might occur between teeth
• Find decay that is developing underneath an existing filling
• Find cracks or other damage in an existing filling
• Alert the prosthodontist to possible bone loss associated with periodontal (gum) disease
• Reveal problems in the root canal, such as infection or death of the nerve
• Help your prosthodontist plan, prepare and place tooth implants, orthodontic treatments, dentures or other dental work
• Reveal other abnormalities such as cysts, cancer and changes associated with metabolic and systemic diseases

Even though no X-ray can be considered routine, many people require X-rays on a regular basis so that their dental condition can be monitored. Many children need X-rays every six months to one year, depending on age, because they are highly likely to develop caries. X-rays also help monitor tooth development. Adults with extensive restoration work, including fillings need to check for decay beneath existing fillings or in new locations. Anyone who drinks sugary sodas, chocolate milk, coffee or tea with sugar- even mildly sugary beverages create an environment in the mouth that’s perfect for decay, so anyone who drinks these beverages regularly will need to have more regular X-rays. For people with periodontal (gum) disease, periodontal treatments may need to be stepped up if there are significant or continuing signs of bone loss. People who are taking medications that lead to dry mouth, also called xerostomia. In a dry mouth, the pH decreases, causing the minerals in the teeth to break down, leaving them prone to caries. Smokers, because smoking increases the risk of periodontal disease.

Intraoral Radiographs
Intraoral X-rays are the most common radiographs made. If you’re like most people who visit the dentist, you’ve had many sets of intraoral radiographs in your life and you’ll likely have many more. Because they give a high level of detail, these are the X-rays that allow dentists to find caries, look at the tooth roots, check the health of the bony area surrounding the tooth, see the status of developing teeth and otherwise monitor good tooth health. The various types of intraoral X-rays show different aspects of the teeth:
• Bitewing X-rays highlight the crowns of the teeth. On each radiograph, the upper and lower teeth in one portion of the mouth are shown, from the crown to about the level of the jaw.
• Periapical X-rays highlight the entire tooth. On each radiograph, the teeth from either the upper or lower jaw in one portion of the mouth are shown. The difference from bitewings is that in a periapical X-ray, the whole tooth is shown, from the crown down past the end of the root to the part of the jaw where the tooth is anchored.

Extraoral radiographs & Cone Beam Computerized Tomography or 3-D Imaging System
Extraoral X-rays are made with the film outside the mouth. These can be considered the ” big picture” X-rays. They show teeth, but their main focus is on the jaw or skull. Extraoral radiographs are used for monitoring growth and development, looking at the status of impacted teeth, examining the relationships between teeth and jaws and examining the temporomandibular joint or other bones of the face. Extraoral X-rays are less detailed than intraoral X-rays, so they are not used for detecting caries or flaws in individual teeth.

• Panoramic radiographs show the entire mouth area – all teeth on both upper and lower jaws – on a single X-ray. This type of X-ray requires a special panoramic X-ray machine. The tube head that emits the X-rays circles behind the patient’s head, while the film simultaneously circles across the front. That way, the full, broad view of the jaw is captured on one film. Because the machine moves in a set path, the patient has to be positioned very carefully. Because the beam and the film are both moving, any movement from the patient will blur the image on the screen. That’s why such care is taken to keep the patient’s head absolutely still in exactly the right position. The machines may have chin rests, forehead rests and side head positioners, plus bite-blocks that patients will be asked to close their teeth around. All this may look and feel intimidating, but the process is very safe and often uses less radiation than intraoral radiographs.

• Cone Beam Computerized Tomography/3-D Imaging System: The new technology is known as Cone-Beam Computed Tomography (CBCT) or Cone-Beam Volumetric Tomography (CBVT) and is an X-ray imaging approach that provides high resolution 3-dimensional images of the jaws and teeth. CBCT images provide invaluable information that is not contained in conventional 2-dimensional films. The quality of CBCT images are comparable to conventional medical CT scans but at a fraction of the radiation dosage, ensuring that radiation exposure is kept to a minimum.

Cone-Beam CT fulfills a much-needed diagnostic imaging need in dentistry. The technology is derived from its medical counterpart, the computed axial tomography, which is one of the most important radiological exams world-wide. While cone-beam CT is very different from medical CT, it also produces 3-dimensional images. Clear advantages of CBCT are its rapid imaging time (20 seconds) and its much lower radiation dose compared to medical CT. 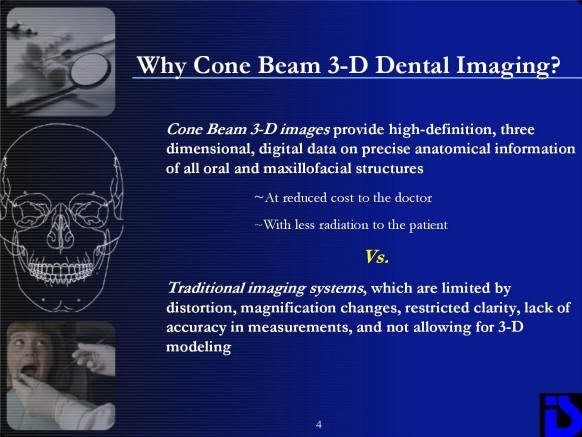 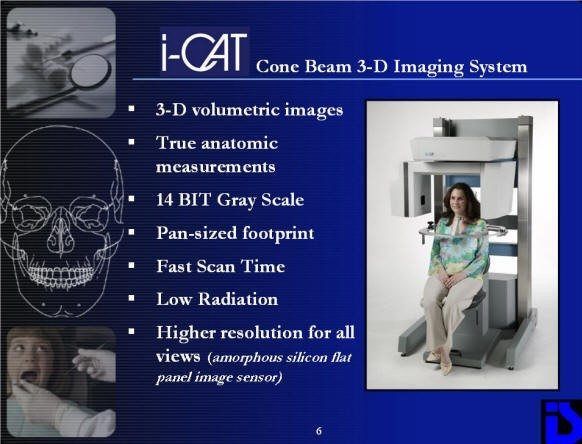 Both 2-D and 3-D X-rays can show bone height and width, yet only the CBCT can measure the bone thickness of the jaws and also define the shape of the bony contours. CBCT can also accurately locate the position of the inferior alveolar canal in the lower jaw, thereby minimizing the risk of paresthesia caused by damaging the nerve. In the upper jaw, knowing exactly how much bone there is for the implant site will reduce perforations through the maxillary sinus. All of these advantages result in a greater success rate from CBCT guided implant placement.

IMPACTED TEETH: With CBCT, it has become very easy to determine where an impacted tooth is located in relation to the rest of the dentition. Traditionally, many different types of X-rays were needed to localize an impacted tooth in relation to the adjacent teeth. Although the films were able to identify whether the tooth was buccal or lingual, it was still impossible to measure exactly how far away the impacted crown was to the roots of the other teeth.

With CBCT, the diagnosis becomes a simple visual exercise, with the images showing exactly the location of the entire dentition, even the impacted teeth. The inclination of the teeth, direction of eruption and completion of root formation is shown. The CBCT software can also measure exactly how far in the bone the impacted tooth is positioned and can accurately determine the distance to the closest root structure.
CBCT diagnosis makes the recovery of these teeth much easier for orthodontists and oral surgeons. Orthodontists use this extensive information in devising the best biomechanics and vectors to bring the impacted teeth into the dental arch. Dental surgeons, knowing exactly where the tooth is located, can minimize the amount of bone drilling needed to access the crown of the teeth and avoid damage to adjacent proximal root structures.
New 3-D Cone beam CT Technology: A much easier and more visual method of localizing impacted teeth or placing dental implants.

X-Ray Safety
At Reconstructive and Implant Dental Center, our prosthodontist takes great care to protect our patients’ health while using X-rays in Overland Park, Kansas. Conventional X-rays used in dental and medical offices emit extremely small doses of radiation. However, bodies can still be damaged by many small doses of radiation that add up over time. Although the amount of radiation used in dental X-rays is very small, the effect is cumulative, so all radiation counts. That’s why experts recommend that X-rays be used judiciously and with precautions to help protect the patient from unnecessary radiation exposure.
• Reduced X-Ray Dose –
The single most important way our prosthodontist keeps patients safe from radiation is by limiting the beam to the small area being X-rayed and by reducing the amount of radiation that strays from that path. This is done by a process called collimation, in which the machine directs the X-rays through a lead-lined column and out a tiny opening at the end. Although an X-ray machine looks quite large, the X-rays are limited to a small area less than three inches in diameter as they come out of a small cone at the end. X-ray machines are well shielded and there is very little radiation exposure beyond the diameter of the primary beam. Before making radiographs, dentists will cover a patient from the neck to the knees with a lead-lined full-body apron.

If you want to experience our high-quality dental care, schedule an appointment with Dr. [doctor-name], by calling 913-534-8801.